This piece was originally published on Design Observer.

Henry N. Cobb: Words And Works is the best design monograph I’ve ever read. Yes, I mean read. This is not simply a glorified portfolio, an overly-heavy tome bursting with images. This is a monograph that’s meant to be read just as much as it is to be looked at. Its small footprint — a compact 4.5x7.5”, beautifully designed by the Boston design studio OverUnder — immediately suggests a different kind of design book — an ‘un-monograph, as they call it — one that mixes both built and unbuilt work with interviews, lectures, essays, and texts from Cobb’s nearly seventy year career.

If you’re like me, Henry Cobb isn’t a name you know. I had never heard of Henry Cobb before picking up the book (I picked it up at the recommendation of Michael Bierut, on the year-end episode of The Observatory) but you know at least some of his work. For some background: Cobb graduated from the Harvard Graduate School of Design in 1949, where he studied under Walter Gropius. He went on to co-found I.M Pei & Associates (later renamed Pei Cobb Freed and Partners in 1989) and worked along side his more-famous partner since the 1955. For five years from 1980-1985, he returned to Harvard as chair of the architecture department. Now at 93, Words and Works reads more like a journal or memoir, attempting to untangle and reflect upon this multi-decade career, contextualizing the move from modernism to post-modernism, and continually wrestling with the role of architecture in society. 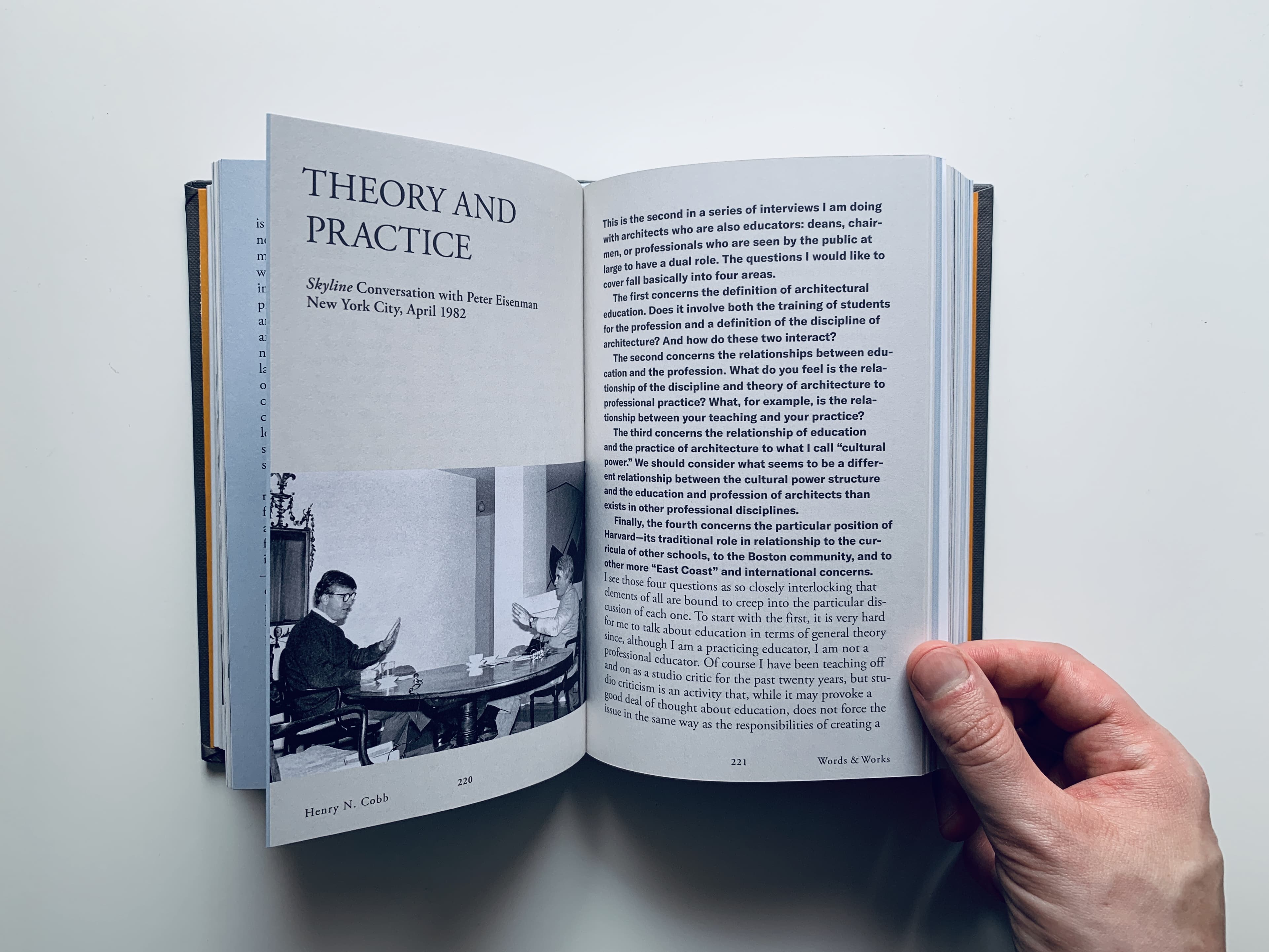 The book opens with Cobb’s Harvard thesis from 1948, a waterfront development for his hometown, Boston. This project, we quickly discover, embodies all the questions Cobb asks throughout the book and his career: the value of architecture history, questions of place and context, and the ethics of architecture. (Fresh from the Bauhaus, Gropius preached modernism at the expense of history and Cobb attempts to separate himself from the curriculum Gropius developed, becoming a student of architecture history to fill in the gaps of his own education.) The strands that runs through his work are not stylistic but philosophical.

Through a series of interviews, conversations, and case studies, Cobb moves chronologically through his career, reflecting, questioning, and second-guessing the buildings in his portfolio. His writing is clear, quiet, and honest. Boston’s Hancock Tower, his first major project — and a controversial one — finds Cobb, years later, simultaneously defending some decisions while admitting to his own perceived failures. It’s this honesty that makes the book so refreshing. Cobb seemingly has little interest in being in the spotlight (as evident by his decades-long partnership with Pei) and often puts his work in a larger context, just as interested in talking about the buildings around his work than his building itself, and allows others to question and critique his work. In one especially fascinating section, we see a group of architects and critics (John Hejduk, Peter Eisenman, Laurie Olin, Hal Foster, among others) in dialogue to critique Cobb’s proposal for Trafalgar Square in London, opening the discussion to larger questions of the rise of postmodernism. Cobb’s insights on practice, on teaching, on history, on criticism are sprinkled throughout (his reflections on his chairmanship at Harvard will be especially interesting to those who both practice and teach), adding a new dimension to both his work and the practice at large. 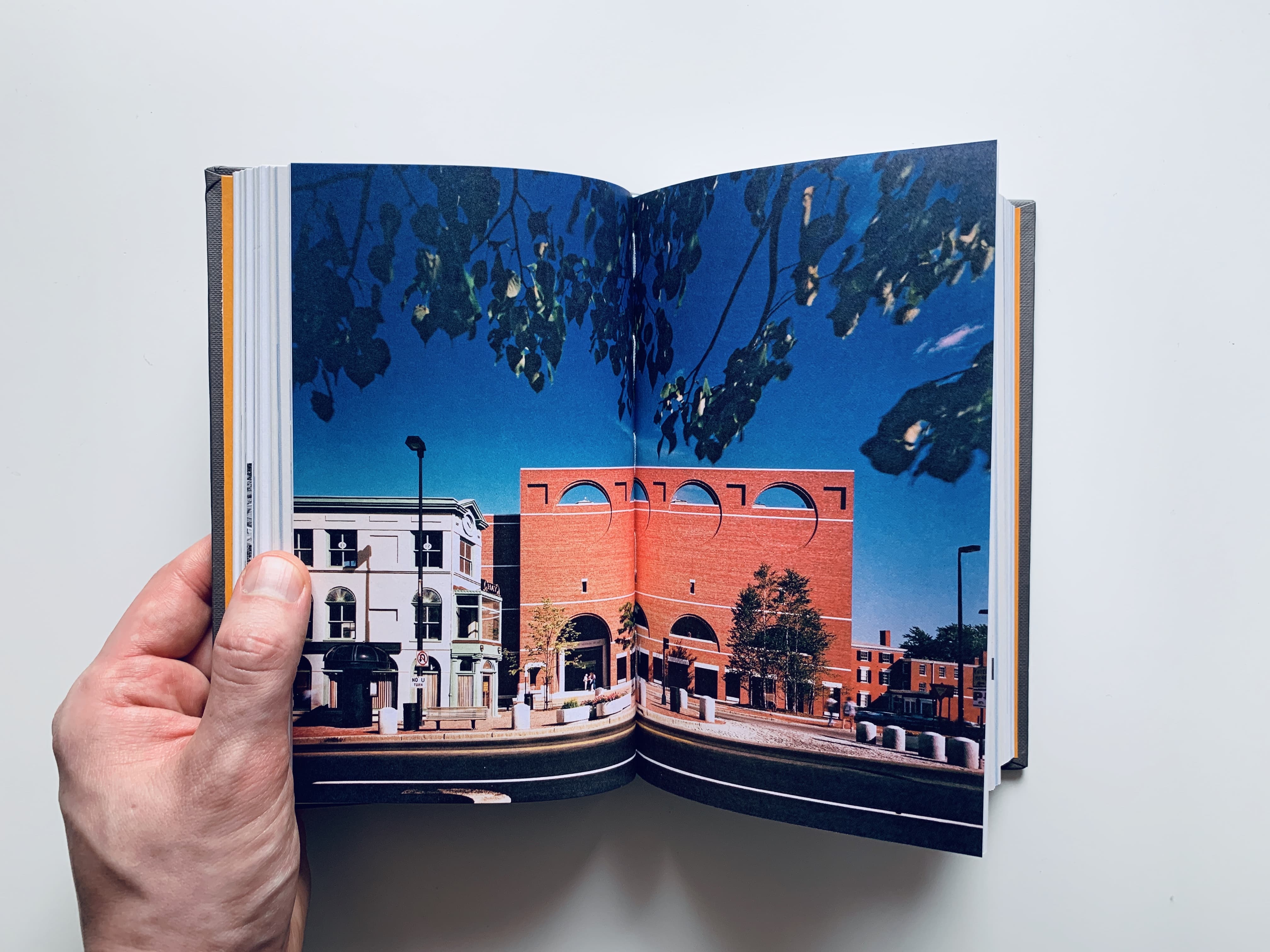 But perhaps what makes this book so interesting is that it feels like it shouldn’t be interesting at all. So much of Cobb’s career has been spent designing work that is decidedly…pedestrian? Non-descript office towers, glass-clad skyscrapers, brick-laden courthouses. In the era of the starchitect, in a time when how a building will look on Instagram is part of the design process, Cobb moves in the opposite direction. His work is the kind we walk by every day, never thinking twice about. Yet page after page, he ruminates on these buildings, considering their context, how they structure the communities they surround, both successfully and unsuccessfully, pulling the layers away to reveal the thought process behind each work. The simple becomes complex, the ordinary becomes engaging.

Cobb uses his own career to wrestle with the architect’s powerlessness in the face of politics, contractors, developers, and cultural forces. In examining both his built works and unfinished proposals, we see the process that brings a project to fruition from selling the proposal to getting it built — and every compromise in between. This insight into the power dynamics of architectural practice reminded me of another recent book that lifted the veil into the dynamics of profession: Four Walls and A Roof by OMA partner Reinier de Graaf. But where Cobb turns his gaze inward, reflecting on his own work, de Graaf is often looking outward, trying to play the role of outsider critic and insider practitioner simultaneously. When de Graaf was on my podcast earlier this year he noted this contraction, saying “I don’t preach what I practice.” Cobb, on the other hand, does try to preach what he practices, diving right in and trying to figure out how his own career reconciles these contradictions.

In a 2017 essay for Creative Review, design critic Hannah Ellis noted that graphic design monographs have largely become memoir-like books designed to canonize their designers and appear as little more than self-aggrandizement. But, she asks, what if the monograph could do more?

[D]o memoir-ographs need to work a bit harder to justify themselves? And, if the premise that makes them more than just a ‘self-aggrandising monograph’ is some kind of vague educational offering, do they need to go beyond ‘how-to’ career-advice and into the kind of questioning that might be challenging for the audience but beneficial nonetheless?…So much of brilliant critical thinking is often tied up in abstruse academic language and/or produced by smaller publishers – maybe the real opportunity here is as a mainstream stepping-stone into criticality, using the authority that a popular name carries…perhaps this is a chance to make asking complex questions palatable, or at the very least, digestible.

This is exactly what Cobb’s done with Words and Works. He’s used his own career not simply to cement his status in history but to ask questions of it, of himself, of us. What do we want from our buildings? How does what we design influence those it comes in contact with? Who are we working for? Somehow quiet yet vibrating, reflective yet critical, visual yet literary, large-scale yet humble, Henry N. Cobb: Words and Works is everything I want in a monograph, and a fitting cap to a singular career. Designers, take note. ✖